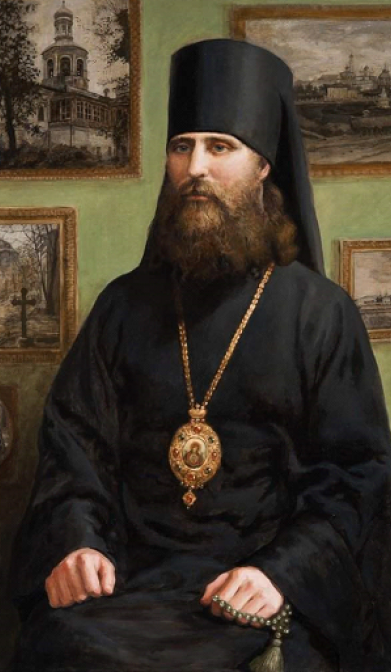 The holy New Martyr Archbishop Hilarion (Vladimir Alexievich Troitsky in the world), an outstanding theologian, an eloquent preacher, and a fearless defender of Christ’s holy Church, was born around 1885.
Vladika Hilarion wrote many books and articles on various topics, including “The Unity of the Church.” His Master’s thesis, “An Outline of the History of the Church’s Dogma,” was over five hundred pages long, and was a well-documented analysis of the subject.
During the Council of 1917 he delivered a brilliant address calling for the restoration of the Moscow Patriarchate, which had been dissolved by Tsar Peter I in the eighteenth century. When Saint Tikhon (April 7) was chosen as Patriarch, Saint Hilarion became his fervent supporter.
Saint Hilarion was consecrated as bishop on May 20, 1920, and so the great luminary was placed upon the lampstand (Luke 11:33). From that time, he was to know less than two years of freedom. He spent only six months working with Patriarch Tikhon.
Vladika was arrested and exiled in Archangelsk for a year, then he spent six years (1923-1929) in a labor camp seven versts from Solovki. There at the Filomonov Wharf he and at least two other bishops were employed in catching fish and mending nets. Paraphrasing the hymns of Pentecost, Archbishop Hilarion remarked, “Formerly, the fishermen became theologians. Now the theologians have become fishermen.”
Archbishop Hilarion was one of the most popular inmates of the labor camp. He is remembered as tall, robust, and with brownish hair. Personal possessions meant nothing to him, so he always gave his things away to anyone who asked for them. He never showed annoyance when people disturbed him or insulted him, but remained cheerful.
In the summer of 1925, Vladika was taken from the camp and placed in the Yaroslav prison. There he was treated more leniently, and received certain privileges. For example, he was allowed to receive religious books, and he had pleasant conversations with the warden in his office. Saint Hilarion regarded his time at the Yaroslav Isolated Detention Center as the best part of his imprisonment. The following spring he was back at Solovki.
In 1929 the Communists decided to exile Archbishop Hilarion to Alma-Atu in central Asia. During his trip southward from the far north, Saint Hilarion was robbed and endured many privations. When he arrived in Petrograd, he was ill with typhus, infested with parasites and dressed in rags. When informed that he would have to be shaved, he replied, “You may now do with me whatever you wish.” He wrote from the prison hospital, “My fate will be decided on Saturday, December 15. I doubt I will survive.”
Saint Hilarion died at the age of forty-four in the hospital of a Petrograd prison on December 15, 1929. His body was placed in a coffin hastily made from some boards, and then was released to his family. The once tall and robust Archbishop Hilarion had been transformed by his sufferings into a pitiful white-haired old man. One female relative fainted when she saw the body.
Metropolitan Seraphim (Chichagov) provided a set of white vestments for the late Archbishop. He was also placed in a better coffin.
Metropolitan Seraphim presided at the funeral of Saint Hilarion, assisted by six bishops and several priests. The saint was buried at Novodevichii Monastery.
Saint Hilarion is commemorated on December 15 (his repose in 1929); May 10 (his glorification in 1999); the Third Sunday after Pentecost (All Saints of St. Petersburg); July 11 (The Finding of his relics in 1998); and on the Sunday nearest to August 26 (All Saints of Moscow). 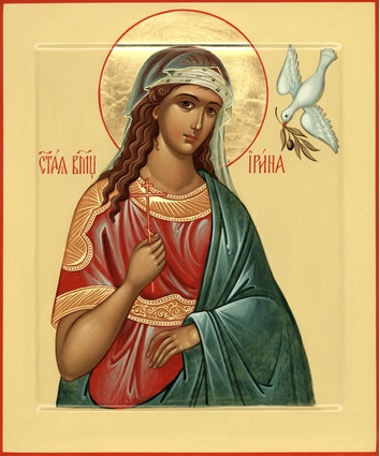 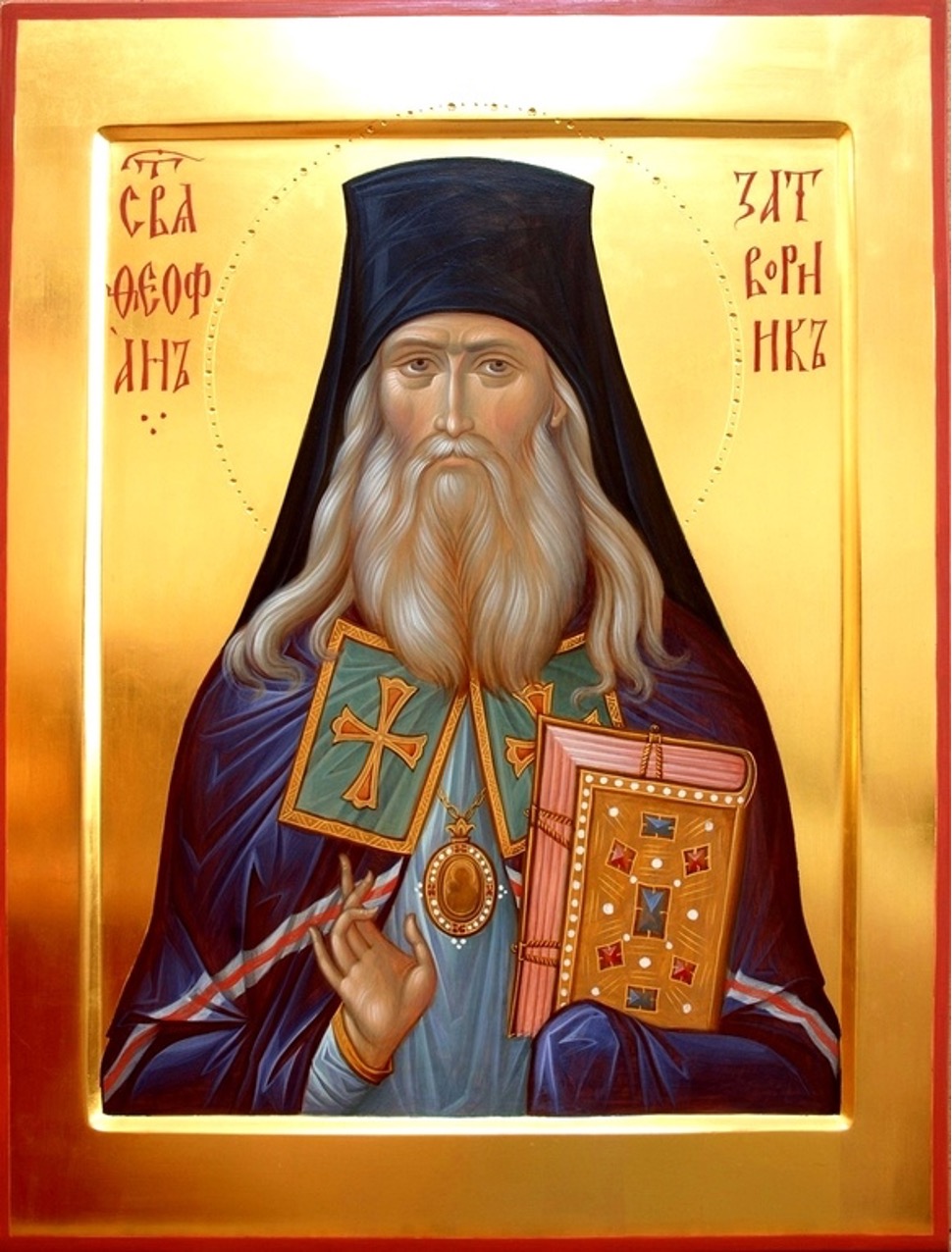 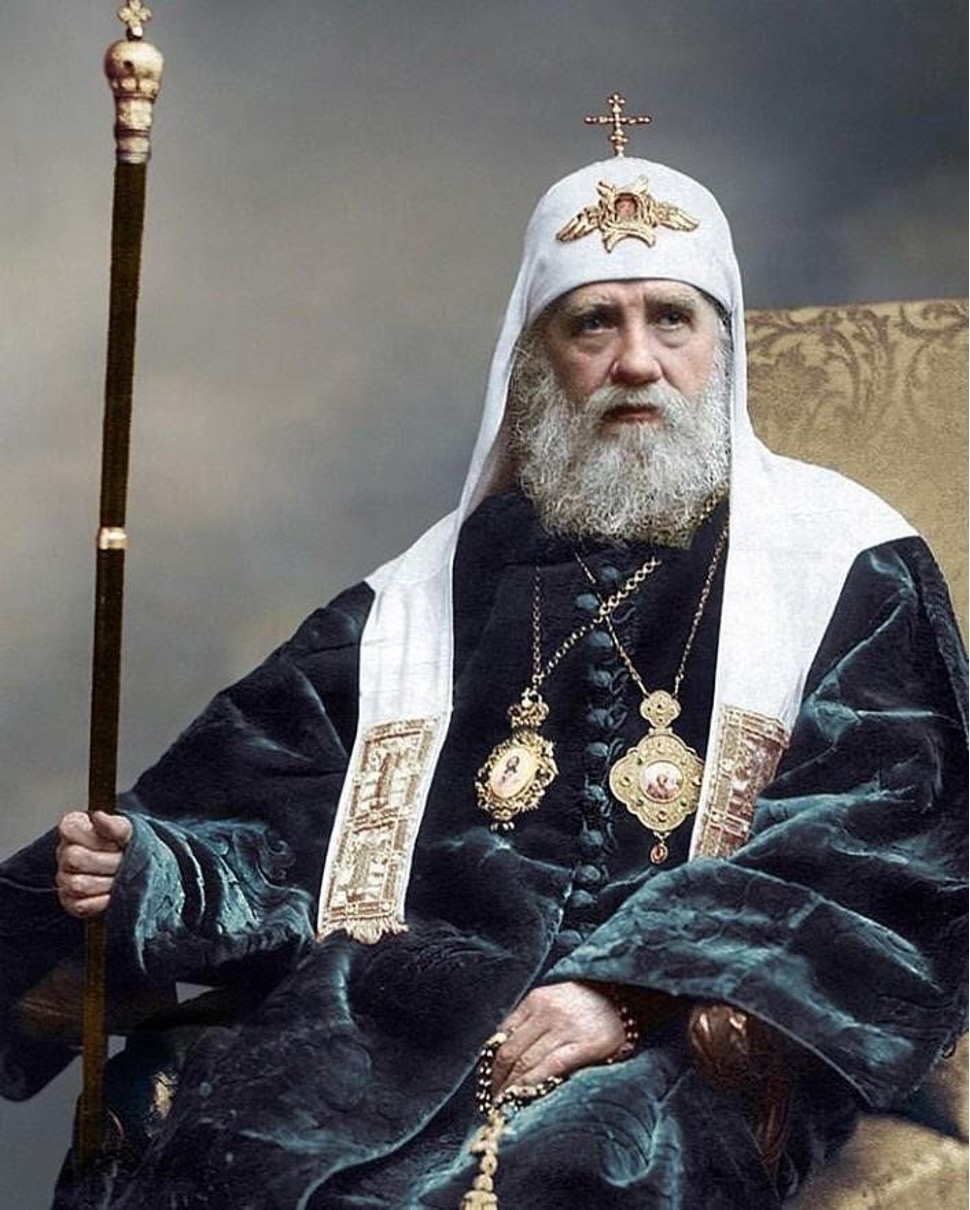 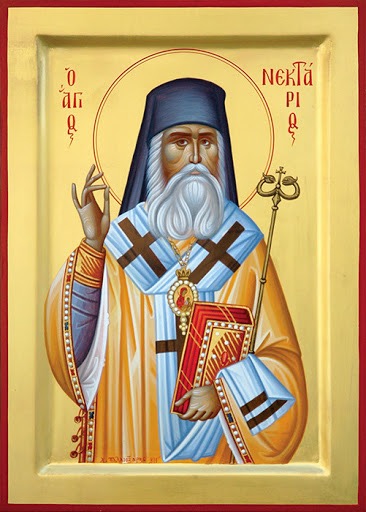 Saint Nektarius was born in Selyvria of Thrace on October 1, 1846. After putting himself through school in Constantinople with much hard labour, he became a monk on Chios in 1876, receiving the monastic name of Lazarus; because of his virtue, a year later he was ordained deacon, receiving the new name of Nektarius. Under the patronage of Patriarch Sophronius of Alexandria, Nektarius went to Athens to study in 1882; completing his theological studies in 1885, he went to Alexandria, where Patriarch Sophronius ordained him priest on March 23, 1886 in the Cathedral of Saint Sabbas, and in August of the same year, in the Church of Saint Nicholas in Cairo, made him Archimandrite. Archimandrite Nektarius showed much zeal both for preaching the word of God, and for the beauty of God’s house. He greatly beautified the Church of Saint Nicholas in Cairo, and years later, when Nektarius was in Athens, Saint Nicholas appeared to him in a dream, embracing him and telling him he was going to exalt him very high.
On January 15, 1889, in the same Church of Saint Nicholas, Nektarius was consecrated Metropolitan of the Pentapolis in eastern Libya, which was under the jurisdiction of Alexandria. Although Nektarius’ swift ascent through the degrees of ecclesiastical office did not affect his modesty and childlike innocence, it aroused the envy of lesser men, who convinced the elderly Sophronius that Nektarius had it in his heart to become Patriarch. Since the people loved Nektarius, the Patriarch was troubled by the slanders. On May 3, 1890, Sophronius relieved Metropolitan Nektarius of his duties; in July of the same year, he commanded Nektarius to leave Egypt.
Without seeking to avenge or even to defend himself, the innocent Metropolitan left for Athens, where he found that accusations of immorality had arrived before him. Because his good name had been soiled, he was unable to find a position worthy of a bishop, and in February of 1891 accepted the position of provincial preacher in Euboia; then, in 1894, he was appointed dean of the Rizarios Ecclesiastical School in Athens. Through his eloquent sermons his unwearying labours to educate fitting men for the priesthood, his generous alms deeds despite his own poverty, and the holiness, meekness, and fatherly love that were manifest in him, he became a shining light and a spiritual guide to many. At the request of certain pious women, in 1904 he began the building of his convent of the Holy Trinity on the island of Aegina while yet dean of the Rizarios School; finding later that his presence there was needed, he took up his residence on Aegina in 1908, where he spent the last years of his life, devoting himself to the direction of his convent and to very intense prayer; he was sometimes seen lifted above the ground while rapt in prayer. He became the protector of all Aegina, through his prayers delivering the island from drought, healing the sick, and casting out demons. Here also he endured wicked slanders with singular patience, forgiving his false accusers and not seeking to avenge himself. Although he had already worked wonders in life, an innumerable multitude of miracles have been wrought after his repose in 1920 through his holy relics, which for many years remained incorrupt. There is hardly a malady that has not been cured through his prayers; but Saint Nektarius is especially renowned for his healings of cancer for sufferers in all parts of the world.